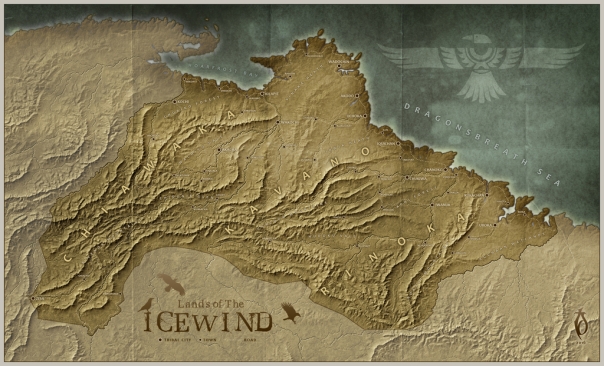 This is my contribution to the Cooperative Guild World Map that is under construction  right now at the Cartographers Guild (the WIP thread can be found Click here).

The story behind this map is that its inhabitants are a tribal people whose customs are similar both to that of ancient Japan and to that of America’s First Nations. Various species ranging from human, to elf, to orc coexist within the land. Whereas all of the tribes were once nomadic, or semi-nomadic, in the last several centuries some of these tribes have switched to an agricultural economic structure. The three largest of these tribes, the Chiawaka, the Kavano and the Rinoka have federated with one anther for mutual aid and protection. While these peoples do not conceive of the land as something to be “owned”, they nevertheless recognize each others right to cultivate particular regions of the land without interference. They will thus unite to defend one another against attack.

The land derives its name from the arctic northerlies that regularly sweep over the land with unrelenting force. Of special significance to the peoples of this land is the rare arctic raven, a creature whose feathers are the color of snow. It is thought that these birds are the children of the great raven spirit who watches over the northern lands. Sightings of such ravens are seen as good omens.

Credits: I drew inspiration for the raven icon in the ocean from this image).